Learn everything you ever wanted to know about this truly Canadian dish! 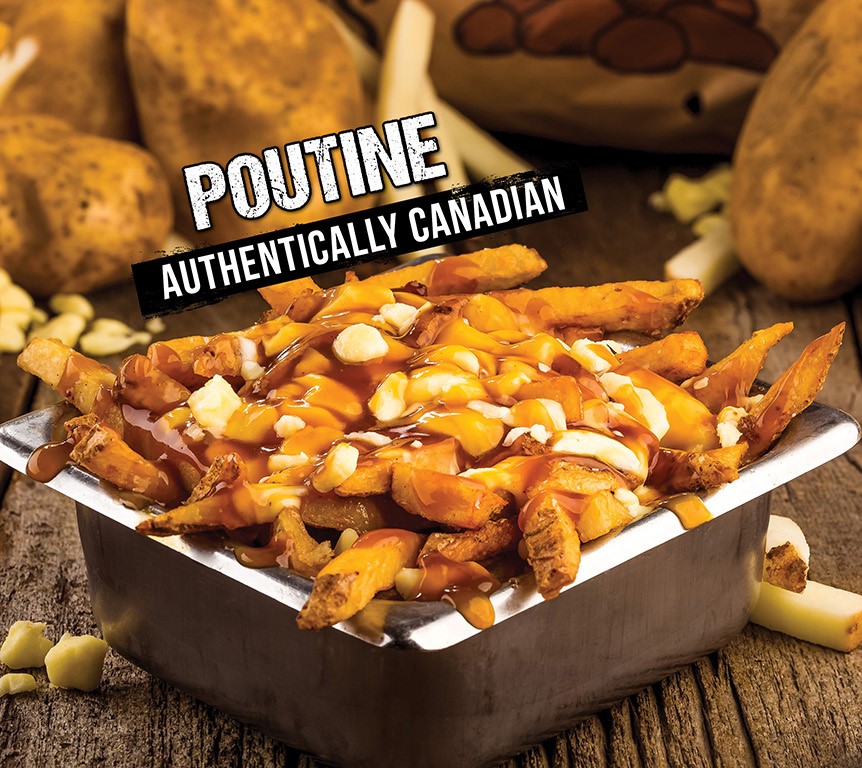 The History of Poutine

While many people may know poutine to be a traditional comfort food, do you know where this popular dish consisting of french fries, brown gravy and cheese curds got its start? There are several different sources who claim to be responsible for the creation of poutine, making it difficult to pinpoint the exact origin, but the most widely accepted of these claims comes from the small dairy-farming town of Warwick, Quebec, Canada. In 1957 Fernand Lachance was working in the restaurant he and his wife owned – which was named Café Ideal at the time, and was later renamed Le Lutin qui rit – when regular customer Eddy Lainesse asked that cheese curds be added to his French fries, Lachance is quoted as having said “ça va te faire une maudite poutine!”, or “that will make a damned mess!”, before fulfilling the order and serving it up in a paper bag.

This combination eventually became a hit with his customers, some opting to add ketchup or vinegar to their fries and curds as well. In 1963 Lachance made a few changes to the dish, since serving it in paper bags was leaving behind too much of a mess on his tabletops, he began serving it on plates, which caused the fries to cool off much quicker and left customers feeling dissatisfied; this led to the inevitable addition of gravy to help keep the food hot. By the 1980’s poutine became a food commonly sold by street vendors in Quebec and Ontario, but did not become widely popular in Canada until the early 1990’s when fast food chains began introducing it as a new item on their menus.

Your modern day, authentic Canadian poutine should be made with a thick-cut French fry, which should be crisp on the outside and softer on the inside – this can best be achieved by using large russet potatoes, cut into approximately 7/16-inch sticks – brown gravy, which is typically made from a mixture of beef and chicken broth, and should be thin enough to flow through all the cracks, and evenly coat your french fries, before being topped generously with cheese curds. Some people may substitute cheese curds for mozzarella, but this actually creates “disco fries” instead of poutine, and while disco fries are also delicious, those squeaky cheese curds are a vital ingredient to making yourself a proper poutine.

Because of the popularization of poutine, restaurant owners decided to jump on the bandwagon and create their own versions of poutine in order to corner the market; this included higher-end restaurants incorporating poutine into their gourmet menus and serving it with items like foie gras, as well as specialty restaurants like poutineries being introduced. This lead to poutine becoming a surprisingly trendy food, as restauranteurs began experimenting with toppings and creating a sort of fusion-cuisine. Some of these variations include things like: bacon poutine, mac and cheese poutine, cheeseburger poutine, nacho poutine, pulled pork poutine, and for customers that prefer a meat free diet, vegan and vegetarian poutines have also become a popular trend, eliminating animal products from the gravy, cheese, toppings, and cooking oils.

While poutine has been growing in popularity and can be found primarily throughout Canada and into the Northernmost United States, poutine remains the most popular in Canada. The top three provinces who favour poutine the most are Quebec, Ontario and British Colombia, and can be found among popular tourist attractions and street food vendors. Most fast food places and diners offer poutine either as a side, or main course, so no matter the size of your craving you will be sure to find something to hit the spot! Poutine has also become somewhat of a novelty dish, invoking brands to come out with their own poutine inspired/flavoured products, such as potato chips and less conventional products like gravy flavoured soda-pops, which may be fun to try, but nothing can compare to the delicacy that is a real poutine.